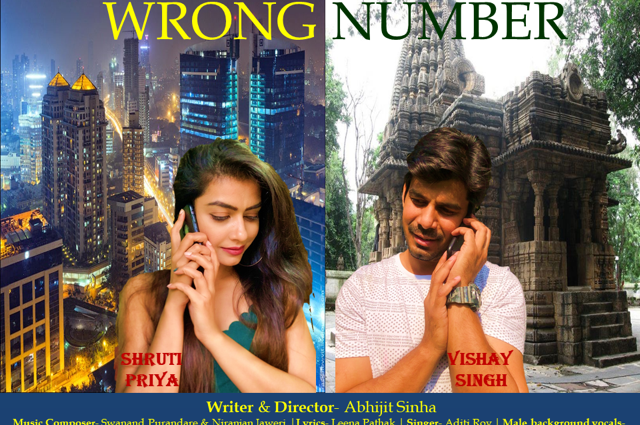 By: amit
In: Entertainment
With: 0 Comments

“Wrong Number-A musical love story “ based on the backdrop of Lockdown. It portrays a Long-distance Relationship that makes its way to the Hearts of people on eve of Valentine’s Day. Love is in the air.

This Short film is Produced by Euphoria Films.

This film shows Love and long-distance relationship during Lockdown. Rahul and Medha the lead characters live in Chhattisgarh and Mumbai. They found each other through the wrong number on phone. It’s a sweet beautiful story. The film is Written and Directed by noted Actor, Writer, and Director Abhijit Sinha. DOP and Editor Nisha Prabhat once again did a great job. Lead Cast Shruti Priya and Vishay Singh have portrayed the characters of Medha and Rahul. Their chemistry is amazing.

Aditi Roy a Delhi-based singer has created magic with her soulful melodious song “Aashiyaan”. Swanand Purandare a known name in the music industry has created soulful music in this film. The Film’s USP is a unique concept and content along with the way it’s captured in each frame.

We wish Abhijit Sinha and his team the Wrong Number best wishes and Good luck.