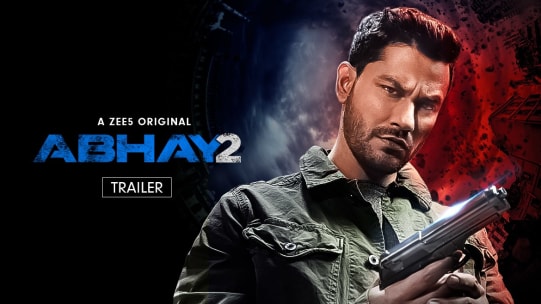 By: amit
In: Review
With: 0 Comments

A gripping investigative crime thriller – Abhay 2 is back with Abhay Pratap Singh as a top-notch cop investigating the series of heinous and violent crimes. Kunal khemu plays the lead role of the investigating officer with Chunkey Pandey and Ram Kapoor joining the party being the most barbaric and horrifying criminals as one can get.

Premiered on 14 August 2020 on ZEE5, directed by Ken Ghosh and produced by B.P. Singh, the series stars Kunal Khemu, Ram Kapoor, Chunky Pandey, Bidita Bag, Raghav Juyal, Indraneil Sengupta, and Asheema Vadaan.
Though there is a plethora of crime thriller web shows on digital OTT space but one of the most popular Hindi crime thriller shows is Abhay streaming on ZEE5. After the success of its first season, the makers have launched it’s Season 2.

Abhay 2 features some merciless and dangerous criminals being on the move in Lucknow for organized criminal activities. The series revolves around the remorseless and blood-filled murders. The story directly brings to the point without wasting much of its viewer’s time.

The episode called Bone Soup showcases Chunkey Pandey as a twisted man who eats the brains of scholar kids. Ram Kapoor plays the role of the most merciless antagonist of this season. He enters in the later episodes but manages to keep up the fear and suspense intact. He is a mysterious man who kidnaps a bus full of kids along with their teacher and kills a noted journalist. He does this all to get the cop Abhay’s attention. Bidita Bag embraces her dark, rebellious side as she has been portrayed as a sadist psycho killer. She finds orgasmic pleasures in inflicting pain and ultimately pulls teeth out of dead bodies as a souvenir.

The second season of Abhay is much more interesting for which audience can be glued to their sets. It is grand in terms of the star cast and their performances. Kunal Khemu has taken it to the next level of performance in terms of being a protagonist and Ram Kapoor has proved to be the most merciless antagonist in season 2. The stories are based on true events. It was really important to bring out such stories to make people aware and more alert. The series has been written and edited very beautifully. The performances are highly effective and heart touching.

We will preferably give 4 out 5 for the series, the series is amazing and keeps the audience tightly gripped until the last episode. You can watch the series streaming on ZEE5. It is recommended not to watch it with kids and elderly family members, there are heart wrecking and disturbing scenes.

Have you watched it yet? How did you like it? Let us know by hitting the comments section below and feel free to ask if any queries.